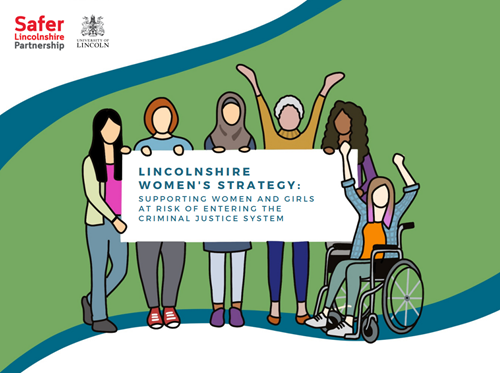 The grant award said, “The purpose of the grant funding is to stabilise the financial position of women’s community sector organisations in England and Wales to support the continued availability of community-based provision for female offenders. This provision is essential to successful delivery of the aims and objectives of the Government’s Female Offender Strategy, published in June 2018.”

Work on developing this strategy was informed by the voices of four Lincolnshire women who had had experience of the criminal justice system and who generously told us their stories. They were interviewed confidentially by women academics from the University of Lincoln who then summarised those stories in a meeting of the Safer Lincolnshire Partnership’s sub-group formed to work on this strategy. Those stories were hard to listen to because of what sub-group members felt was the avoidable pain that the women, their families and friends had experienced. The main themes from these interviews were:

There were key themes of lack of support, inadequate continuity of care and failure to adopt mental health informed and trauma informed approaches.

Graduates from the University of Lincoln worked with the group to create a short animation that captures the women's stories. 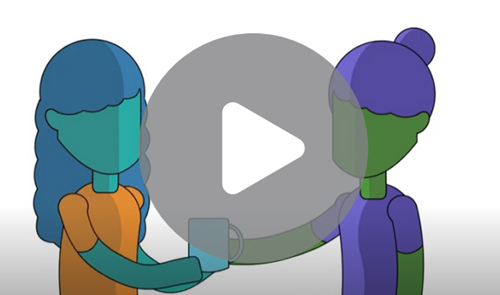 Watch the animation video (opens in a new window)

Some suggestions had emerged from the interviews:

The key messages received by the Safer Lincolnshire Partnership’s sub-group working on the strategy were:

The women’s positive feedback about probation had occurred when the women had worked with a Lincolnshire Action Trust's women’s service. This had reinforced the lessons of broader research which had indicated that third sector interventions were preferred to mainstream service provision.

The Safer Lincolnshire Partnership is aware that women-specific services found in other areas (even those similar in geography and population) are absent in Lincolnshire, to the detriment of women and girls in the county. It has decided to find a way forward by supporting community and other services to build capacity in working with women and girls.

The strategic priorities that constitute this strategy are:

The Safer Lincolnshire Partnership will also adopt the National Probation Service Action Plan covering building a whole system approach, reducing the use of prison sentences under 12 months, and improving the journey through the criminal justice system.

Strategic priority 1: The Lincolnshire Women's Strategy is for all women and girls

Many women in prison have been victims of much more serious offences than the ones they are accused of, with research indicating that women’s exposure to physical, emotional and sexual abuse, including coercive control, is for many a driver of their offending. A key difference between women and men in prison is that family relationships tend to be a protective factor for men but, for women, relationships are often a risk factor. Baroness Corston’s study of women in the criminal justice system 2007 found that coercion by male partners and relatives is a distinct route into criminality and prison for some women.

The co-existence of victimisation and offending is now better recognised, but the links between them are still not well understood by all agencies. There has been some progress both in tackling violence and abuse against women and girls, and in the treatment of victims in the criminal justice system. Improvements in the police response and in aspects of the court process should lead to benefits for women offenders affected by domestic abuse, but challenges remain.

Strategic priority 2: Services used by women and girls should be women centred

Experience elsewhere has shown the importance of a women’s centre service to provide a women and girl friendly space in which services can be delivered.

The evidence from research considered by the Safer Lincolnshire Partnership is that women at risk respond more effectively if services are women centred – that is, services should be:

Strategic priority 3: Services for women and girls should be supported by a sustainable women’s centre

The evidence indicates that the existence of a women’s centre would support agencies’ achievement of the other strategic priorities of the strategy, in particular, the creation of a supportive women only space as a base for services. The Safer Lincolnshire Partnership has agreed:

The need for a women’s centre is especially apparent in preparation for women’s release from prison. It is important to be informed in good time when a woman or girl with a Lincolnshire address is to be released from custody in order to engage with them well in advance. This will enable appropriate responses to the complexity of women’s lives, for experience the needs of their children.

Lincolnshire is behind other areas in the provision of women’s centre services. One important consideration, therefore, is where a Lincolnshire women’s centre project should start. The Safer Lincolnshire Partnership believes that it would be best to start on a small scale at grass roots level by helping existing generic services to grow their capacity.

The Safer Lincolnshire Partnership also believes in the importance of sustainable funding. The leaders of front-line organisations are often preoccupied with bidding for funding to the extent of being drawn away from engagement with service users. Sustainable funding is therefore a key objective of the Lincolnshire Women’s Strategy.

The Safer Lincolnshire Partnership has adopted the following definition of a woman’s centre:

Women's Centres are independent specialist community support services.They only serve women, in recognition of the well-evidenced need for gender-specific interventions. Centres provide holistic, woman-centred, trauma-informed services in safe, women-only spaces. The aim is to help all women to gain the skills and confidence to become more independent and reach their full potential. Many provide access to specialist advocacy, advice and support on housing, substance misuse, mental and physical health, employment, debt, domestic abuse and family and parenting issues. This can be through in-house specialist staff and through partnerships with other agencies.

The peak age for women offending is 15, in stark contrast to men whose peak age is 23. This strongly suggests that providing new services for girls experiencing or likely to experience adverse childhood experiences (ACE), or building capacity in existing services, could have profound benefits for girls and their families. It could also interrupt pathways into the criminal justice system at the earliest opportunity, using services unconnected with the criminal justice system: education, health, and children services.

Strategic priority 5: Services should accept women’s and girls’ complex needs and not use complexity as a reason to reject them

Women and girls at risk of entering the criminal justice system typically present with complex needs. That is, they often have two or more needs affecting their physical, mental, social or financial wellbeing. Too often women have been rejected by services because their needs are complex. This strategic priority means that Lincolnshire services now agree to hold women service users in engagement with services and to respond holistically to their needs.

Strategic priority 6: Services should commit to diverting women and girls from the criminal justice system

Criminal justice outcomes can be especially damaging for women. Although women constitute less than 5% of people in prison, they account for over 19% of self-harm incidents, an indication of the traumatic impact of imprisonment on many. Women entering prison are more likely to have been imprisoned for non-violent offences. Women in prison are highly likely to be victims as well as offenders. Over half the women in prison report having suffered domestic violence with 53% of women reporting having experienced emotional, physical or sexual abuse as a child. Women in prison are more than twice as likely as men to say they have committed offences to support someone else’s drug use as well as their own. Many have histories indicative of brain injury and for most this is caused by domestic violence. Many of women in prison have dependent children – nationally, an estimated 17,000 children are separated from their mothers by imprisonment every year.

Many women who are imprisoned receive short prison sentences. These are highly damaging and do not allow for any effective work. Around 77% receive sentences of under 12 months. HMP Peterborough (where Lincolnshire women first go when remanded or sentenced to imprisonment) recently reported that the average length of stay for a woman was 21 days. Such sentences do not allow sufficient time for any rehabilitative work to be completed in custody. Access to programmes and interventions are prioritised for those on longer term sentences.

It is for these reasons that the Safer Lincolnshire Partnership will be renewing its efforts to keep women and girls out of custody by diverting away from the criminal justice system whenever possible.

The Lincolnshire whole system approach will divert women away from the criminal justice system, whenever possible. It means investment in upstream services even though savings may take place elsewhere.

Understanding of trauma has increased significantly along with a growing recognition of the role services can play in perpetuating trauma, inadvertently causing further harm to some of the most vulnerable people they work with. Understanding the impact of trauma on women is therefore vital for providing effective services.

The current understanding of the impact of adverse childhood experiences (ACEs) on women will also be taken into account by Lincolnshire services. These are the more everyday traumas that can be overlooked (for example, parental divorce and parents who abuse alcohol). Women who score four or more ACEs have significantly poorer health outcomes in adult life. Women in prison frequently score four or more ACEs. This reinforces the importance of health commissioners’ support for the Concordat (see Strategic Priority 9).

Trauma-informed services create a culture of thoughtfulness and communication, continuously doing their best to learn about, and adapt to, the different and changing needs of the individuals they work with. In order to do this, it is crucial that services are willing and able to engage with complexity. As a result, trauma-informed care is most usefully defined in terms of ongoing processes, approaches and values, rather than fixed procedures.

There are in addition various touch points prior to contact with the criminal justice system, for example, GP surgeries, midwives, and dentists. All organisations likely to come into contact with vulnerable women have a role to play in identifying concerns and referring.

The national Concordat on women in or at risk of contact with the Criminal Justice System sets out how Government and other partners should work together to identify and respond to the needs of women. The Concordat aims to encourage partnerships at both the national and local level. It is not intended to replace current arrangements, where these are working well, but rather to build on them to improve existing support to women. Accordingly, the agreement in Lincolnshire is for the Safer Lincolnshire Partnership, under the leadership of the PCC, to drive forward the Lincolnshire Women’s Strategy.

The Lincolnshire Concordat differs from the national Concordat in one important respect. The latter only considers the needs of adult women and does not include the youth justice system unless explicitly stated. The Lincolnshire Concordat, however, recognises that peak offending for girls takes place at the early age of 15 and reflects concern that teenage girls’ mental health and other needs should be addressed urgently.

By participating in the Concordat, Lincolnshire agencies have agreed to work together to identify and respond to the needs of women. This will mean changes to agencies’ 2021-22 business plans and strategic priorities in order to prevent women and girls entering the criminal justice system by ensuring that they have access to the services they need, at the times in their lives when those services will have the biggest impact and in ways that women themselves have told us will make a difference.

Participants of the concordat commit to working together to improve outcomes for Lincolnshire women and girls at risk of entering, or who have already entered, the criminal justice sector.