Community safety and prevention in partnership

The following are just some of the key achievements and progresses made against the PCC’s priority 'Community safety and prevention in partnership'.

Re-offending rates are much higher for people where alcohol plays a role in the offence. This is why the PCC funded a pilot ‘sobriety tag’ scheme in Lincolnshire.

‘Sobriety tags’ are issued to offenders who commit alcohol-driven crimes. The ankle bracelet detects alcohol levels in the wearer’s sweat and alert the authorities if an abstinence order has been breached.

This project aimed to reduce future victims of crime, particularly victims of domestic abuse. It has since been hailed a success by the National Centre for Social Research.

Find out more about sobriety tags in the original news story 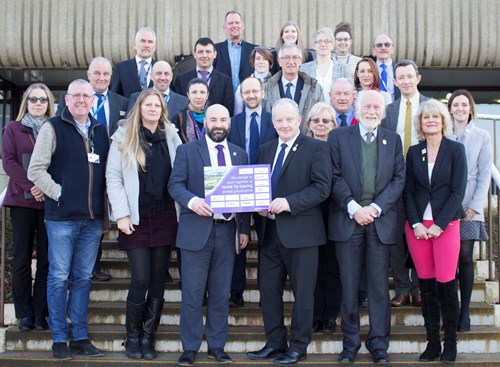 In 2019, the Police and Crime Commissioner held a fly-tipping roundtable, that brought together key partners to investigate what can be done to tackle the rising tide of illegal rubbish dumping that is blighting Lincolnshire’s communities and countryside.

Attendees signed a 'pledge' to seek new ways of working together to tackle fly-tipping.

From this, the Lincolnshire Environmental Crime Partnership was developed, which has seen key partners come together to create essential and innovative ways to tackle fly-tipping and environmental crime.

Find out more about the fly-tipping roundtable in the original news story.

The PCC has invested millions of pounds equipping the force to protect rural communities from crime and tackle the organised gangs who often commit them.

The fight against hare coursing is just one part, though an important element, of our fight to keep rural communities safe. Operation Galileo – aimed at tackling illegal hare coursing - continues to enjoy tremendous success.

In 2021, the PCC was successful in securing an additional £993,000 funding from the Government to cover the costs relating to Operation Galileo which will be spent delivering additional frontline policing.

Now, new laws to tackle hare coursing have been set out by the Government – after years of lobbying by PCC Marc Jones who has been calling for stricter new laws since taking office in 2016.

Lincolnshire was the first force in the UK to seize hare coursers’ dogs as far back as 2017 – but the new legislation will mean the costs of kennelling the dogs can be seized from the offenders.

Read more about proposals for the new legislation.