The following are just some of the key achievements and progresses made against the PCC’s priority 'Policing that works'.

Right Tools for the job

Ensuring that the officers and police staff have the ‘right tools for the job’ has always been a priority for the PCC.

Ensuring that they have the right equipment and appropriate training better allows them to respond to the diverse needs of our communities. 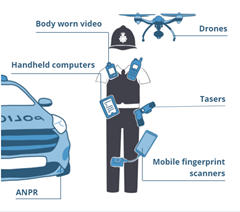 It is vitally important that ‘999’ services work together as closely as possible to deliver the best possible service for the people of Lincolnshire. That spirit of collaboration has led to the establishment of a joint fire and police Headquarters and 999 response call centre at Nettleham - formally the Police stand-alone HQ-  and a joint police, fire and ambulance station in Lincoln.

The new tri-station building in Lincoln, South Park  was the first operational hub between all three emergency services in the country. The new facility is saving a significant amount of public money in running costs and has ensured staff from all services work more closely together to deliver improved service for the community.

Read the original news story about the tri-station in South Park.