Protecting and Supporting Victims and the Vulnerable

The following are just some of the key achievements and progresses made against the PCC’s priority 'Supporting Victims and Survivors'.

The PCC is committed to ensuring that anyone who is affected by crime in Lincolnshire receives the support they need, regardless of whether they choose to report the crime to the police or not.

As part of the PCC’s Victims Strategy and huge amount of work has been going on in Lincolnshire to support victims of crime.

Victim Lincs is a service put in place by the PCC as part of his victims’ strategy. The service ensures that anyone living, working or studying in Lincolnshire gets the support they need if they have been the victim of crime.

In 2020, the PCC launched the Victim Lincs website - the first ever Lincolnshire website purely dedicated to helping victims and survivors find the information and support they need.

Anyone who has been the victim of crime in Lincolnshire – regardless of whether the crime was reported to the police or not- can now access support, information, and practical advice all under one virtual roof thanks to a new online portal.

The website features a service directory, which details the different support options available to victims of crime and how to access them. 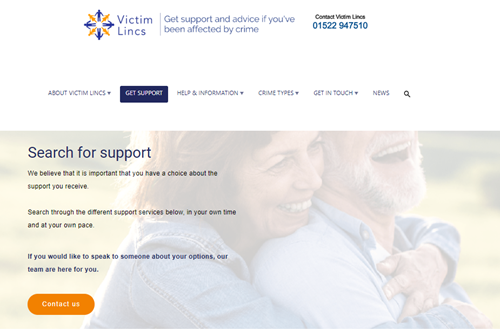 In 2021, Victim Lincs were awarded the Victims Choice Quality Mark by Supporting Justice CIC in recognition of the “high standards of victim care work” and the way in which staff made people feel “valued and listened to”.

Find out more about the Victims Choice Quality Mark in the original news story.

The PCC secured an additional £216,000 worth of funding to support services helping victims of domestic abuse and sexual violence during the pandemic. The money helped a raft of local services providing services and support for victims of abuse during the lockdown.

The funding was made available for charities to help organisations meet the additional costs incurred whilst adapting their services during the pandemic, and to cope with increased demand.

Raising awareness of fraud and scams 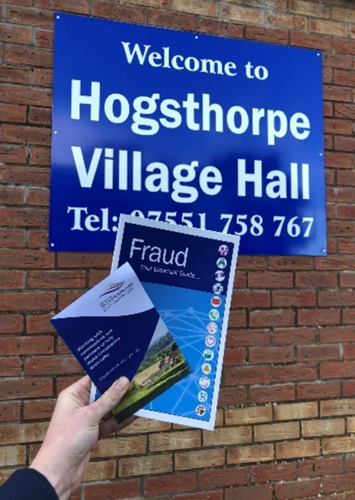 The PCC has always put the protection of vulnerable people high on his list of priorities. This includes preventing people falling victim to fraud and scams.

In fact, Lincolnshire was the first county in the UK to have both the PCC and local police force signed up as a Friends Against Scams organisation. Our staff have been trained to spot scam artists and understand how to help people prevent falling victim.

Friends Against Scams is a National Trading Standards Scams Team initiative which aims to protect and prevent people from becoming victims of scams by empowering people to take a stand against them.

The PCC and his office have also led a host of awareness and training sessions, providing individuals with the knowledge and awareness to identify and report scams.

If you would like to book a session for your local community group, please speak to our Safer Together Team.

Supporting those who have served in the military

The PCC has signed the Armed Forces Covenant, which pledges to support those who have served in the military.

The covenant is an assurance that those who are or have been members of the Armed Forces, and their families, should be treated with fairness and respect.

It focusses on helping members of the Armed Forces community have the same access to government and commercial services and products as any other citizen.

Lincolnshire has the second largest population of veterans in the UK – with eight per cent of the countries ex-servicemen and women living in the county.

Read more abut the PCC signing the Covenant in the original news story.

The PCC is signed up to Project Nova —a scheme which supports ex-military personnel who have been arrested or taken into custody.

The project ensures they receive the support they need through the legal process and helps with accommodation, employment, drug and alcohol issues, debt and mental health issues.

There were 47 referrals to Project Nova between the period of July 2019—April 2020. These came from prisons, custody suites and probation.

In 2017, the PCC funded a pilot in which a Mental Health Practitioner (MHP) was embedded within the Force Control Room (FCR). The MHP was able to assist with incidents relating to mental health and advise alternative mental health referral routes to avoid unnecessary detention or hospital admittance.

A review of this pilot showed the scheme avoided 261 detentions of individuals under the Section 136 of the Mental Health Act (1983) and 241 admissions to Accident and Emergency. The time saving to the force as a result is estimated at 1,436 hours.

As a result of this, the PCC and local lead NHS Clinical Commissioning Group with the responsibility for mental health took the decision to jointly commission the service in conjunction with a Crisis Vehicular Response (CVR) function.

These rapid response cars, one of which is based at Lincoln and the other at Boston, can be dispatched for cases requiring urgent response. These are not a blue light response vehicles, but have a response time of one hour from deployment. They are staffed by a Mental Health Crisis Nurse and a Mental Health Support Worker.

Both cars work alongside the FCR MHP, working 2pm to 10pm, seven days a week. They will respond to any mental health incident where a face to face assessment may assist in the best pathway for the service user and conclude an incident, thereby reducing demand for officers.

Officers can request the attendance of the CVR at mental health incidents which they are in attendance. The CVRs will then be deployed as appropriate by the MHP in the FCR.

In summer 2018, residents and businesses in Lincoln raised concerns of a visible increase of anti-social behaviour (ASB), drug taking, rough sleeping and aggressive begging in the city centre.

The PCC knew the solution would not simply be enforcement and called a summit of dozens of community leaders, police officers, traders and charities to find a solution.

After months of work a partnership was formed and a new Lincoln Intervention Team was launched—jointly funded by the OPCC, City of Lincoln Council, Lincolnshire Partnership Foundation Trust and Lincoln BIG.

The Lincoln intervention team was launched with the aim of significantly reducing the incidence of ASB, aggressive begging and substance misuse on the streets of Lincoln – in turn improving the feeling of safety within the city and reducing community tension.

The staff were tasked with, not only dealing with the symptomatic ASB, but also addressing the deep-rooted issues that lead a person to engage in street ASB. This is focused around addiction and mental health support.

The team aims to provide a holistic response to the complex needs of individuals, which includes building a rapport with the on-street community through daily outreach as well as providing support and assistance across a range of issues.

While the team has a focus on reducing ASB, this is often achieved by looking beyond the behavior exhibited, for example a persistent beggar in the city centre may be begging because they are not in receipt of benefits in which case arranging their benefits and accompanying and supporting them to do this may resolve the issue.

Or it may be that someone is using illegal drugs in the street because they are trying to manage a complex mental health illness which could be addressed by our mental health nurse who can make appointments with a GP to review medication or refer them into other mental health services.

The team also works with several other services including Neighbourhood nursing teams, the local Shelter, Police, Probation and social care.

In the project’s first year:

The OPCC supported the commissioning of this service, which is for vulnerable people in early stages of the criminal justice process.

The service, which launched in April 2020, is commissioned by NHS England and delivered by Lincolnshire Partnership Foundation Trust. It and aims to reduce reoffending by offering a coordinated service to divert people, where appropriate, from the criminal justice system and into health and social care, education and training or other support services.

The services identify people who have mental health, learning disability, substance misuse or other vulnerabilities when they first come into contact with the criminal justice system as suspects, defendants or offenders.

The service can then support people through the early stages of criminal system pathway, refer them for appropriate health or social care or enable them to be diverted away from the criminal justice system into a more appropriate setting, if required.

Liaison and diversion services aim to improve overall health outcomes for people and to support people in the reduction of re-offending. It also aims to identify vulnerabilities in people earlier on which reduces the likelihood that people will reach a crisis-point and helps to ensure the right support can be put in place from the start.